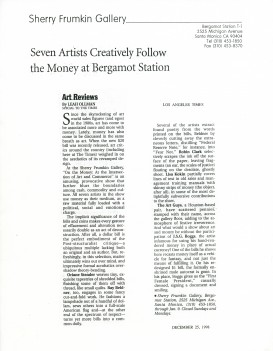 Since the skyrocketing of art world sales figures (and egos) in the 1980’s, art has come to be associatied more and more with money. Lately, money has also come to be discussed in the same breath as art. When the new $20 bill was recently released, art critics around the country (including here at The Times) weighte3d in on the aesthetics of its revamped design.
At the Sherry Frumkin Gallery, “On the Money: At the Intersection of ARt and Commerce” is an amusing, provocative show that further blurs the boundaries among cash, commodity and culture. All seven artists in the show use money as their medium, as a raw material fully loaded with a political, social and emotional charge.
The implicit significance of teh bills and coins makes every gesture of effacement and alteration necessarily double as an act of decontstruction . After all, a dollar bill is the perfect emobidiment of the Post-structuralist critiquea ubiquitous multiple lacking both an original and an author. But, refreshingly, in this selection, matter ultimately wins out over mind, and impressive formal acrobatics over shadow theory-bending. Oriane Stender weaves tiny, exquisite tapestries of shredded bills, finishing some of them off with thread, like small quilts. Ray Beldner, too, engages in some fancy cut-and-fold work. He fashions a lampshade out of a handful of dollars, sews others into a full-scale American flag and at the other end of the spectrum of respect turns yet more bills into a common doily.
Several of the artists extract found poetry from the words printed on the bills, Beldner by cleverly cutting away the extraneous letters, distilling “Federal Reserve Not” for instance, into “Fear Not.” Robin Clark selectively scrapes the ink off the surface of teh paper, leaving fragments (an ear, the scales of justice) floating on the desolate, ghostly sheet. Lisa Kokin partially covers lines of text in old sales and management training manuals with skinny strips of money (the object, after all), in some of the most delightfully subversive contributions to the show.
the Art Guys, a Houston based pair, have scattered pennies, stamped with their name, across the gallery floor, adding to the atmosphere of festive irreverence. And what would a show about art and money be without the paricipation of J.S.G.Boggs, the artist infamous for using his hand-rendered money in place of actual currency? One of the bills he shows here recasts money itself as a vehicle for fantasy, and not just the means of fulfilling it. On his redesigned $1 bill, the formally enshrined male autocrat is gone. In his place, Boggs gives us the “First Female President,” casually dressed, signing a document and smilling. – Leah Ollman